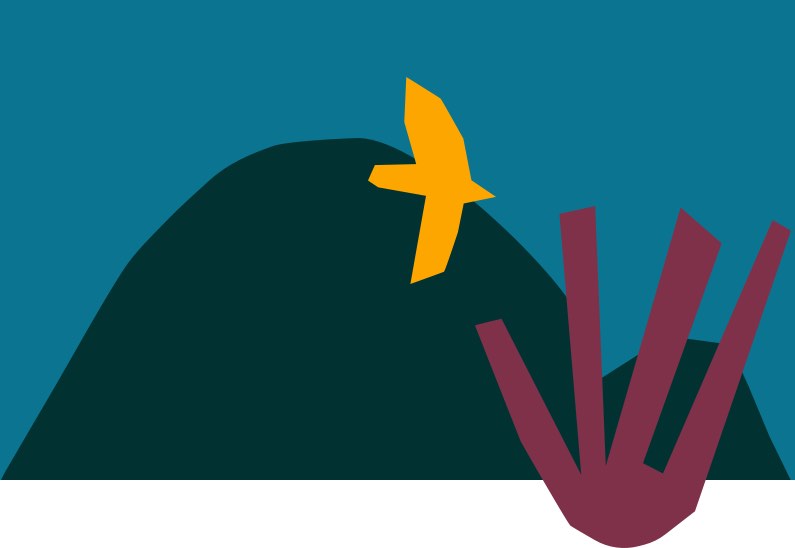 Waterloo Greenway is a remarkable story that’s still unfolding — one filled with generations of diverse communities and unforgettable moments that shaped the landscape of Waller Creek. Today, the park binds this vital part of our city’s shared history together, while creating a brighter future for all.

For over 15,000 years, Indigenous Peoples had their own relationship with this landscape. Generations occupied the Waller Creek area long before it bore that name, including the Coahuiltecans, Lipan Apache, Tonkawa, and Comanche Tribes. Local waters represented a spiritual connection, home to many sacred traditions. Eventually, European settlement into Texas forced most Indigenous Peoples to go underground and identify as “Mexican” in order to stay in their ancestral lands.

Labeled “Austin’s Spring Creek” in an 1838 map, Waller Creek soon finds itself in the heart of American history. In 1839, the neighboring town of Waterloo becomes the capital of the new Republic of Texas. A new city rises quickly, changing its name to Austin. Before our community was named “Austin,” it was known as “Waterloo.”

In the 1840s, German and Swedish immigrants settle on Waller Creek. They establish some of the first businesses in the area. After enduring enslavement, recently freed African Americans created a community here along the banks of Waller Creek. Sometimes called the “Red River Community,” these families lived in and around the land that is today Waterloo Park. Mexican and Lebanese immigrants fleeing political unrest arrive a few decades later.

Built by August Scholz, the Scholz Garten boarding house was an important gathering place for German immigrants. Located in a primarily African-American neighborhood, it was known for welcoming people of color.

The Texas German and English Academy at 507 E. 10th St. was one of the first schools to serve children in the Waller Creek neighborhood. The building is now home to the German-Texan Heritage Society.

The community along Waller Creek – sometimes called the “Red River Community” – thrives as an important transitional area between Neches and Trinity Streets and East Avenue. It connects downtown Austin to the west and Robertson Hill to the east. A large African-American population interspersed with white and Mexican immigrant households contributes widely to the area’s growth and vibrancy.

In 1915, flash floods kill as many as 50 people in Austin, including 12 along Waller Creek. A 1915 article in the Austin American-Statesman reads: “Whole sections of the city were submerged for hours. Houses were washed away, cows, horses, chickens and other fowls were careening down swelled Shoal and Waller Creeks … This morning Austin presents a pitiable sight.”

Waller Creek was prone to violent flash floods that took more than a century to get under control.

By 1920, over 30 black-owned businesses serve the Waller Creek area. They stand shoulder to shoulder with the many grocery stores, shops, and restaurants run by Lebanese, German, Chinese, and Mexican-American neighbors. Throughout the roaring ’20s, newspaper articles show that swimming in Waller Creek is the favorite hot-day pastime for youth in the area.

The Koch and Fowler 1928 City Plan presents the idea of picturesque parks and boulevards in the Waller Creek area. But the beautification plans also reinforce the racist Jim Crow policies. By the 1930s, segregation pushes many families out of the area, and their homes are demolished. Larger commercial enterprises move in, forcing long-standing small businesses to relocate or close their doors.

Through a bond program passed in 1928, the rechannelization of Waller Creek begins. So does the creation of Palm Park near the creek’s shores. The first iteration of the park takes shape adjacent to the Palm School, founded in 1892 as one of Austin’s first elementary schools. The “Palm School playground plan” – including two ball courts, two volleyball courts, two croquet courts, double tennis court, swimming pool, pergola, and brick gymnasium – opens May 29, 1933.

View of the lower Waller Creek area at E. 1st Street, before the rechannelization of Waller Creek. Note the density of the residential area complete with amenities, such as sidewalks.

Mexican-American families move into the Waller Creek neighborhood in the 1920s, bringing their cultural traditions. Workers unearthed some of their religious medals during excavations for the Waller Creek Tunnel.

After enduring slavery, recently freed African Americans create what some called the “Red River Community” along the banks of Waller Creek. They lived in and around the land that is today Waterloo Park.

The Austin Police document a huge pile of trash along the creek bank, which some Austinites used as a dumping ground.

Rev. Levi Stanmore assembled this group to discuss moving their church from  14th and Red River Streets to East Austin. Founded by freedmen, this church was one of many long-standing community institutions to leave the neighborhood along with black residents due to segregation policies.

Palm School and Palm Park play an important role in the life of the lower Waller Creek community in the 1940s. White and Mexican-American children frequent the park. But, for many years, only white children can swim in the park’s popular pool.

Planning of the Interregional Highway over East Avenue starts in the ’40s, and construction begins in the early 1950s. Thanks to improved roads and the introduction of the highway, a variety of news businesses pop up in the area. Many are auto‐related.

Children enjoy a swim at the Palm School pool in 1941.

Businesses along Red River Street, like Lung’s Chinese Kitchen at 12th Street, reflected the cultural diversity along Waller Creek. Joe Lung loaned money to Mexican and black customers when banks would not, saying, “Pay me when you can.”

Mexican-American girls enjoy jumping rope on a pad near the bathroom building at Palm Park.

Federal programs aiding Interstate 35 construction also drive development projects that change the character of the Waller Creek corridor. The Federal Housing Act of 1949 included funding to demolish substandard properties to make room for public facilities. In 1968, the Brackenridge Urban Renewal Project north of 9th Street includes an addition to Brackenridge Hospital and the creation of a public space with two parts: Waterloo Park and Symphony Square.

In the 1950s and 1960s, Red River Street takes its place as the heart of Austin’s music scene. Early entertainment clubs reflect the diversity of the surrounding neighborhoods. Even as urban renewal transforms the area – now known as the Red River Cultural District – it continues to be a place of musical innovation and cultural expression.

In 1969, The University of Texas Board of Regents decides to bulldoze several hundred feet of Waller Creek along San Jacinto Boulevard to expand Memorial Stadium. On Oct. 22, student protesters chain themselves to trees in an unsuccessful attempt to stop the project. It becomes known as the Waller Creek Riot.

In the 1970s, six blocks of homes were condemned and their families displaced to make way for Waterloo Park and other urban renewal projects. The park opens in 1975, hosting scores of concerts, festivals, and events over the years.

In April 1978, Symphony Square opens as a southeastward extension of Waterloo Park on both sides of E. 11th Street, east of Red River Street. The new headquarters of the Austin Symphony Orchestra, the Square is formed by four historic buildings: the Jeremiah Hamilton House (the only building original to the site), New Orleans Club, William P. Hardeman House, and Michael Doyle House. Read more about Symphony Square’s history.

The construction of Interstate Highway 35 cuts Palm School off from the community it serves. When George I. Sanchez Elementary School opens on the east side of the highway in 1976, many students in neighborhoods east of IH-35 attend the new school. After almost two decades of falling into disrepair, Palm School closes in 1976. Learn more about the history of Palm School.

Austin architect Girard Kinney work onsite with Wukasch and Associates in the design and construction of Symphony Square.

The William P. Hardeman House moves to its new location at Symphony Square in 1977. The former residence, built in the 1850s, was originally located at 401 E. 16th St.

Simon Sidle opened his first antique store in the 1920s. He later moved to 1302 Red River St., laying the foundation for an antique district that endured until the 1970s.

The Mexican American Youth Organization votes to establish a southern Texas Chicano university in 1969 in the midst of a movement for much-needed advancement of the Chicano community. Juárez‐Lincoln University is born and eventually moves into the vacant East Avenue Baptist Church. The university closes in 1979, and the building sells in 1980. After community activists make several unsuccessful attempts to declare the property historic, the owners demolish it in 1983, strongly impacting the Mexican-American community.

In the early 1970s, community members ask the City of Austin to establish a cultural facility that honors the Latino community and reflects the historic Rainey Street neighborhood. After unsuccessful efforts in the late 1980s and 1990s, the Emma S. Barrientos Mexican American Cultural Center finally comes to life in June 2007, neighboring Waller Creek.

In the 1990s, lower Waller Creek sees construction of the Austin Convention Center on what was then E. 1st Street. In recognition of the significant Mexican-American community that once lived in the area, the City of Austin renames this main thoroughfare César Chávez Street in 1993.

On Nov. 6, 1997, the Austin City Council passes a resolution to discuss the potential benefits of Waller Creek with the public institutions and private interests that share responsibility for it.

Protestors in Front of Juárez-Lincoln University and the Los Elementos Mural, 1979

After the university’s closure, protestors protect the building and mural. Created in 1977 by artist Raul Valdez, the artwork depicts a field with a  Chicana farmworker and musicians.

A Vision for Waterloo Greenway

The City of Austin had a vision for transforming the neglected Waller Creek area into a connected, inclusive, and vibrant public park that could benefit the entire Austin community. In collaboration with the city, Melba Whatley, Melanie Barnes, and Tom Meredith founded the Waller Creek Conservancy in 2010. Today, both the Conservancy and all of the park’s many destinations are collectively known as “Waterloo Greenway.” Learn more about the Conservancy and the progress it has made in connecting all of the people in our vibrant city to nature, art, culture, and to each other.