On the corner of Cesar Chavez and the I-35 frontage road stands the old Palm School building, the current home of the Travis County Health and Human Services and Veteran Services building, but the building is best known as the elementary school that stood in service to the communities of East Austin for 84 years before closing in 1976. Palm School, founded in 1892, was one of the first elementary schools in Austin, predated only by Pease Elementary School; however, this was not the first use of the site.

The first recorded information for the building was that it was granted to a man named G. D. Hancock in 1838, but it was promptly repossessed in 1839 by the Republic of Texas in Edwin Waller’s plan for the new capitol city of Austin. Edwin Waller, who became the first mayor of Austin, planned for an armory to occupy the site, then located at the intersection of Water Street & East Avenue. The Republic of Texas also used the site to house a barracks and cannon production facilities.

In 1845, Texas was annexed into the United States, becoming a state, and turning over all military sites to the federal government that were under control of the Republic of Texas. The site remained under the control of the federal government until 1887 when it was transferred to the newly created Austin School Board to become an elementary school.

Originally called the Tenth Ward School after the district it served, the building became known as Palm School in 1902 when renamed to honor Sir Swante Palm, a prominent member of the Austin community and education benefactor. Upon his death in 1899, Palm gifted his immense library of 12,000 volumes to the University of Texas.

The school was the first public school in Austin to have a kindergarten class in 1917 and in 1923, Palm School was the largest elementary school in the city of Austin. Palm School and Palm Park played important roles in the life of the lower Waller Creek community in the 1940s and 1950s. While white and Mexican American children frequented the park, only white children could swim in the pool for some time, a popular spot during Austin’s hot summers.

Austin City Council Member Pio Renteriá fondly recalls his days as an elementary‐age student at Palm School, which was enlarged in 1948 and 1949 to accommodate its growing enrollment. For Rentería, memories of free ice cream from Superior Dairies across the street are more pleasant to recall
than those of having to watch swimmers outside the fence of the segregated Palm Park pool. Although the pool was available for some, children still swam in Waller Creek near Palm School and Park.

Palm School was slated be one of the public schools replaced according to the 1958 Austin Plan recommendation. The school survived for a time, but, the construction of Interstate 35 cut the school off from the community it served. Then, when George I. Sanchez Elementary School opened on the east side of the highway in 1976, many students in that neighborhood attended the new school. After almost two decades of falling into disrepair, Palm School closed in 1976.

AISD then came to the conclusion that the building needed to be sold, and in 1980, Jim Berkey and Barry Gillingwater purchased the property. The two local businessmen renovated the building for office use. After this transition, the building became disconnected from the surrounding community. Travis County later acquired the property and has used the building to serve members of the Austin community as Health and Human Services and Veteran Services offices. In order to provide a higher level of service, Travis County plans to relocate these services to a new facility to be constructed on Airport Boulevard.

From ranch house to armory and from school to office, the site has been an important fixture in the history of Austin, and maybe, as the new Waller Creek becomes an icon for connectivity in Austin, a community can come together once again.

Travis County and the Travis County Palm School Advisory Board are seeking community input on the future of Palm School. Whether you attended Palm School, live nearby, work downtown, or care about Austin history and culture, this is an important opportunity to share your feedback.

Palm Park is an important part of Waller Creek Conservancy’s efforts to create a new parks district for Austin. In addition to restoring the creek’s natural environment, and creating a 1.5-mile connected trail along the creek, we will be transforming Palm Park with new design that provides direct access to the creek and trail, new landscaping, and a number of family-friendly features.

Over the past three years, we’ve heard so many personal stories, ideas, and feedback about Palm Park from our community. Many favorite memories include playing in the creek with friends, festivals and special events, games, and enjoying the swimming pool. Overwhelmingly, community members have encouraged us to plan the future of Palm Park around its history with Palm School. The revitalization of the Palm School site represents an enormous opportunity for the new Palm Park and for the city, in general.

– Palm School is critical to the future of Waller Creek because of its strategic location as the gateway to Downtown from East Austin, and its function as a civic landmark.

– The future use and development of the Palm School site will have a huge impact on the adjacent Palm Park.

– Palm School and Palm Park were historically connected and should be reconnected.

– Palm School has significance to the heritage of the community, and Mexican American community, that should be honored and celebrated as part of the future plan.

Share your feedback on the future of Palm School via Travis County’s online survey – open now!

Have a story or memory you’d like to share with us? We are working to document the history of Waller Creek through archives, photos, and oral histories. Let us know, please contact us to share your history! 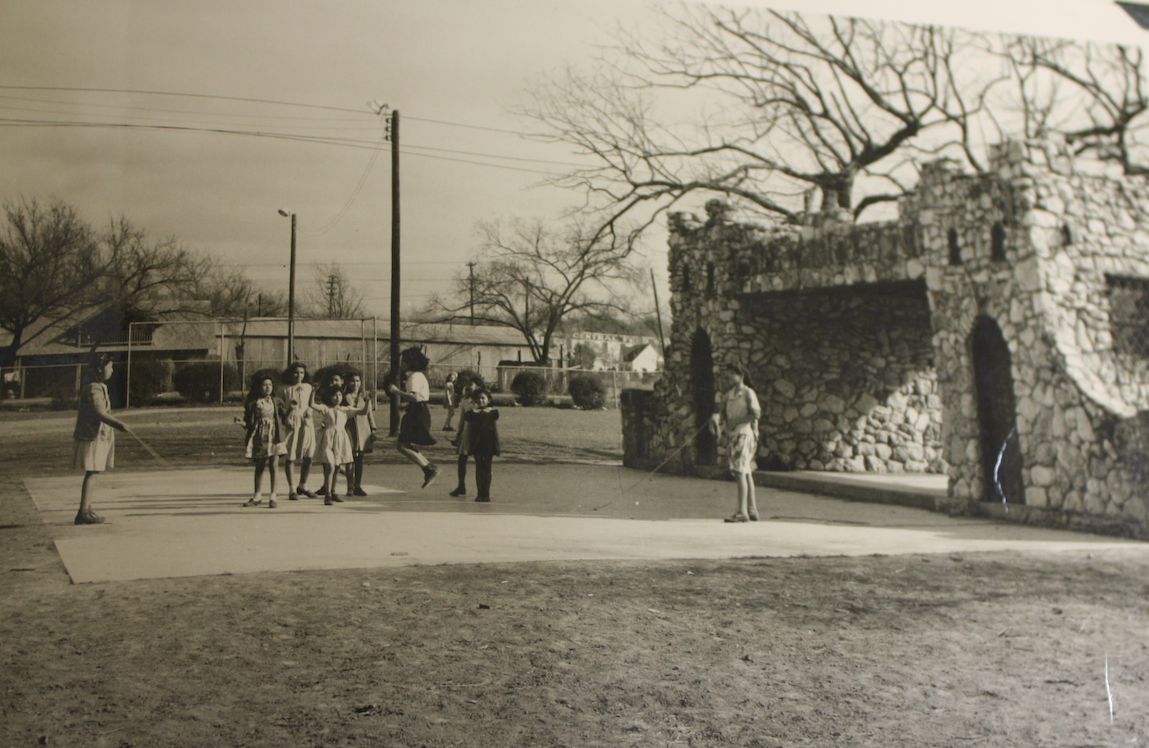 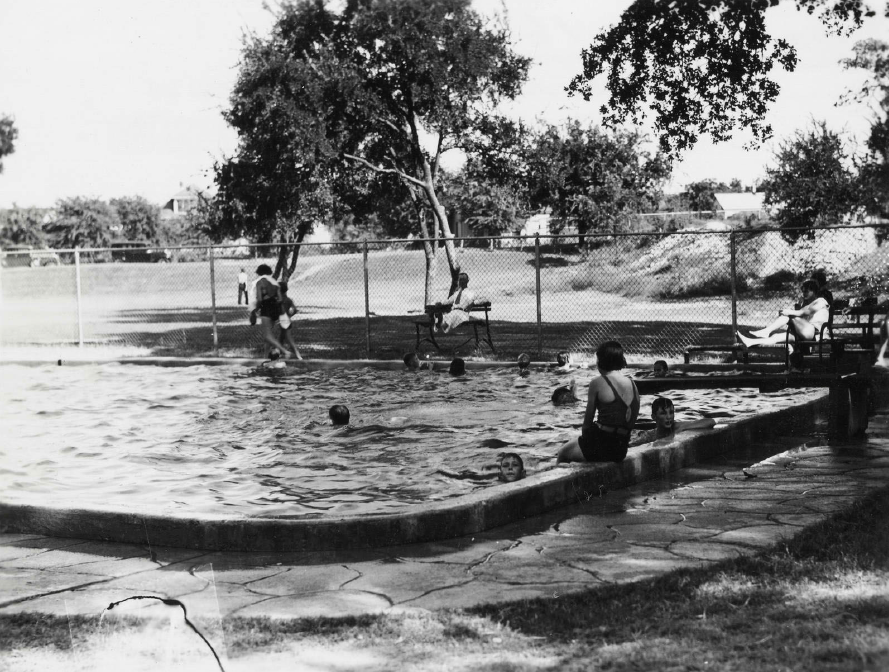 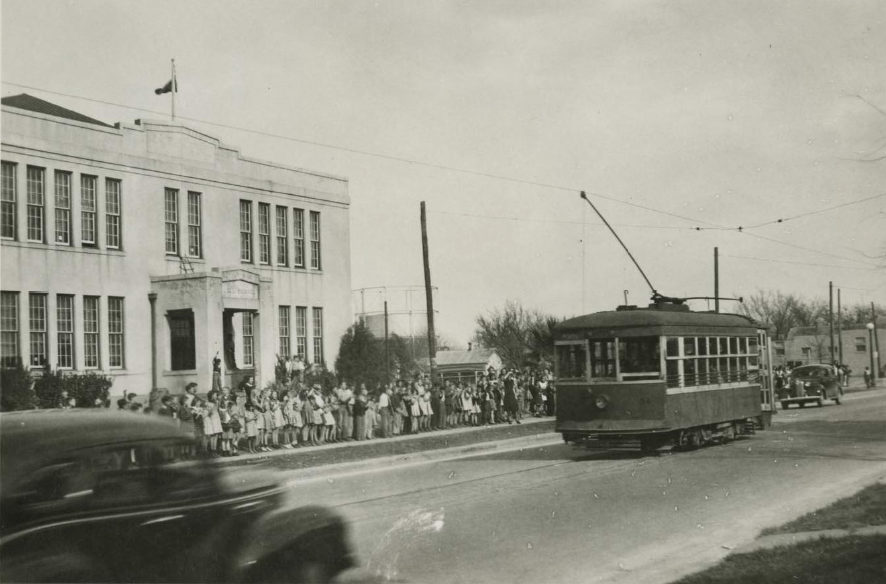 With the rise of automobiles, streetcar service became obsolete. In this February 1940 photograph, Palm
School students watch the last streetcar on its route down East 1st Street. 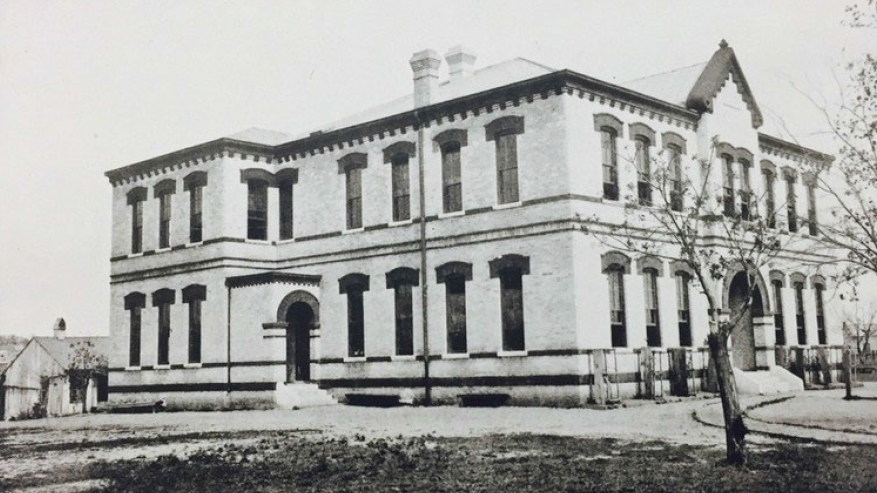 A view of Palm School Park along East Avenue taken after the park was completed in 1933. Note the
landscaping and the accessibility of the park and playground to East Avenue and the neighborhood beyond. Source: Austin
American-Statesman.