During this Black History Month, we’d like to profile one of many special stories on the history of Symphony Square.

Symphony Square was originally designed as a southeastward extension of Waterloo Park on both sides of East 11th Street east of Red River Street starting in 1971. The “cornerstone of Waterloo Park,” redesigned to serve as the headquarters of the Austin Symphony Orchestra, the complex was formed by three historic buildings: the Jeremiah Hamilton House, the New Orleans Club, the William P. Hardeman House, and the Michael Doyle House.

The New Orleans Club represents a long history and variety of entertainment‐based venues such as bars and nightclubs operated at what was then considered the western end of the East Austin’s 11th Street entertainment district. Many of these venues were housed in older buildings that were formerly business establishments like furniture stores. The New Orleans Club remained a popular venue where one particular artist, Ernie Mae Miller, held a long-time residency and where rock groups also started to perform in the 1960s.

Ernest (“Ernie”) Mae Miller (1927–2010) is an Austin music legend who helped to usher in the beginning of Red River Street’s reputation as a live music venue. The descendant of formerly enslaved educators who themselves became prominent in Austin, Ernie was born in Austin in 1927. Her talent as a musician was discovered at age five. She graduated from L. C. Anderson High School (named after her grandfather) and Prairie View A & M University. In college, Ernie was a member of the Prairie View Co‐ed Jazz Band in which she showed of her skills as a baritone saxophonist. The all‐girl band had the opportunity to travel across the county performing on the same tickets with the likes of Bob Hope and Billie Holiday. When she returned to Austin, Miller pursued a career as a solo jazz pianist and vocalist. She became the featured performer at the New Orleans Club where she enjoyed a 15‐year residency. As it was sited near Waller Creek, the club (then at 1123–1125 Red River Street and now located in Symphony Square) would flood from time to time. Miller recalled arriving one evening for her set and having to walk through the water in her brand-new red suede shoes, ruining them. Ernie Mae Miller recorded two live albums at the venue—both were titled Ernie Mae at the Old New Orleans Club.

Come listen to Ernie Mae Miller’s album at the Opening Celebration of New Monuments on March 2, with music series this April and May, honoring the history of the New Orleans Club this spring.

Red River Street has been the heart of music in Austin, Texas for decades, predating the rock era. The clubs of the ‘50s and ‘60s offered a rich variety of music; house gigs were coveted and the New Orleans Club led the pack. Join us as we pay homage to this venue now located at Symphony Square with a series of free concerts that revisits the sounds of one of Austin’s most beloved music scenes.

Pictured below: The album cover for one of Ernie Mae Miller’s live recordings at the New Orleans Club. Source: Austin Chronicle. 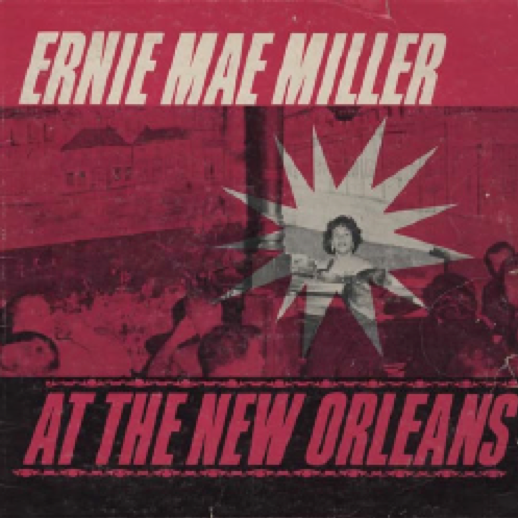 Read more history of Symphony Square and the restoration by WCC in 2018.