Symphony Square, a hidden jewel along Waller Creek, has been revived by the Waller Creek Conservancy after a four-month restoration project. The historic site is a rare oasis in downtown Austin and a time capsule that represents so many memories and stories associated with it.

“Putting down roots at Symphony Square has been a wonderful milestone for the organization. The site has such a rich history, as does the entire creek, and being located here has expanded our thinking about ways to engage the community. We seek to honor the urban histories of Austin at the same time that we’re creating new stories and experiences for future generations,” said Peter Mullan, Waller Creek Conservancy CEO.

Having a permanent home with space for special events, including a beautiful 350-person capacity outdoor amphitheater, now enables us to serve our community through exciting programs that educate about Waller Creek and our future parks. This is the first time WCC staff is officing on the creek, representing a huge milestone for long-term operations and the added ability to monitor daily creek conditions. In 2017, WCC acquired a partial lease of the site north of Waller Creek. The Austin Symphony Orchestra has been a terrific partner with a long legacy at the site and we are excited to build on the synergies between our organizations and the mutual benefit in our involvement.

Restoration was completed in November 2018, led by WCC, with builders Formed LLC, designs by architectural and interior design firm Page, and landscape architects DWG. As part of the project, we completed a comprehensive interior restoration of three buildings: New Orleans Club, Pavilion, and Hardeman House. Site-wide accessibility upgrades were added including an entrance lift, 3500 square-foot deck spanning the site, and indoor/outdoor A/V capabilities.

The site debuted to the public last fall with Creek Show, receiving over 50,000 visitors. This March, WCC will begin hosting a variety of monthly free public programming in Symphony Square, including an artist talks and film screenings in conjunction with the High Line Network art initiative: New Monuments for New Cities. A full calendar of WCC’s spring events will be released in February. Symphony Square is also open for community events and rentals, proceeds benefit operations and programs. Please contact us to view available spaces, availability and rates.

Symphony Square was originally designed as a southeastward extension of Waterloo Park on both sides of East 11th Street east of Red River Street starting in 1971. The “cornerstone of Waterloo Park,” redesigned to serve as the headquarters of the Austin Symphony Orchestra, the complex was formed by three historic buildings: the Jeremiah Hamilton House, the New Orleans Club, the William P. Hardeman House, and the Michael Doyle House. From its establishment and under the leadership of Jane Dunn Sibley, former head of the symphony’s board of directors for whom the complex is now named, Symphony Square became an important venue for live music and other outdoor performances.

Read recent coverage of our new home in the Austin American-Statesman and Culture Map.

The former residence was built in the 1850s. When moved to Symphony Square, the house was placed over a newly dug basement. Austin architect Girard Kinney recalls that the location for the basement was excavated, the concrete structure built, and re‐filled. After the Hardeman House was moved and laid on top of the new basement, the fill was dug back out. The house was listed in the National Register of Historic Places (NRHP) in 1976. A pavilion was added in the 1970s. Tex‐Mex restaurant Serrano’s operated in the building from 1987 to 2015. It will now house the Waller Creek Conservancy offices.

The house was built in 1871 by Jeremiah Hamilton, a formerly enslaved African American man who served as a Reconstruction‐era state representative from 1869–1871; he was the first black man to serve in the Texas Legislature. Hamilton possibly built the unique, three‐walled limestone building where he operated a grocery store. Italian carriage maker and ice manufacturer Michael Paggi owned the property from 1873 to 1881. Over the years, a number of families owned the property; the Kingsberrys sold it to the City of Austin in the 1960s. The Hamilton building will retain its function as home to the Austin Symphony Orchestra.

This building was constructed along Red River Street in the late 1870s where it initially served as the home and grocery store of coal dealer Charles J. Wilson until 1907. In the 1910s and 1920s it was occupied by a series of groceries and saloons. From 1927, the building housed the Acme Glass Company, two different wholesale florists, and a pet shop. The New Orleans Club opened in the 1950s and hosted many Austin musicians and band, including Ernie Mae Miller who became the featured performer at the New Orleans Club where she enjoyed a 15‐year residency, recording two live albums at the venue—both were titled Ernie Mae at the Old New Orleans Club.

During Symphony Square’s planning, the Urban Renewal Agency decided to save the building. For some time, the building housed a gift shop, and later the Serrano’s party room. It will now serve as additional space for Waller Creek Conservancy’s community events and rental opportunities.

Photo featured above by Leonid Furmansky 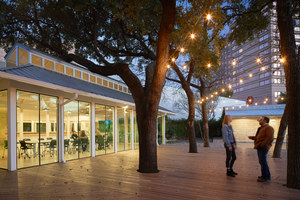 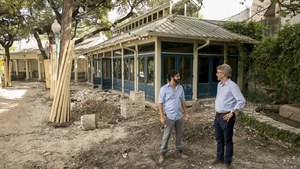 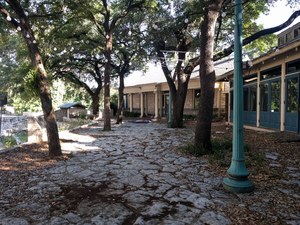 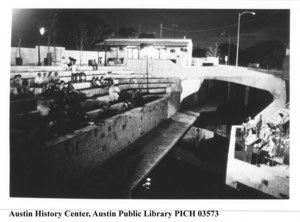 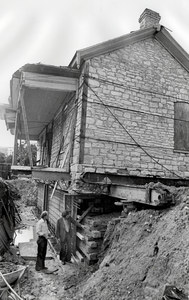 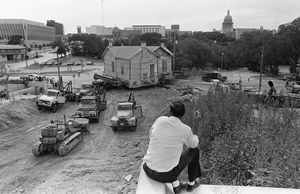